Volunteers Steve Brzezinski, Steve Warnek, Stacy Kornhauser, and John Bufe participated in the annual Murray Hill Day at the Nokia facility. Many of the employees stopped to identify their interest in PMINJ activities and learn about the opportunity to participate with the chapter on campus at the Satellite monthly meeting.

PMINJ volunteers Peter Krijger and Mike Vitale spent Saturday, November 2, teaching project management skills to Eagle Scout candidates at the Patriot's Path Merit Badge Workshop in Parsippany. The Scouts were introduced to PM fundamentals to assist them in completing their Eagle Scout Service Project. The sessions were very interactive and well received by the BSA. This is the 6th straight year PMINJ attended the event. 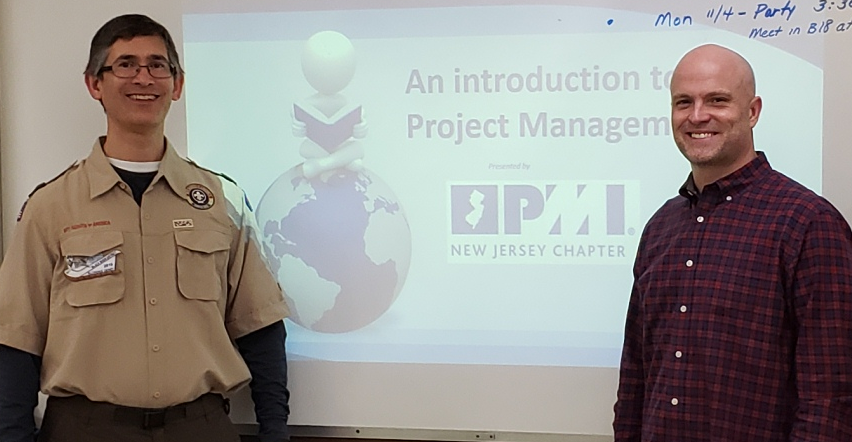 Ride at Stirling Stables - August 2019
Why is a Project like a Horse?

PMINJ Cares at the Hillside Food Bank - May 2019

Returning for the fifth straight year, the PMINJ School Outreach team spent the day teaching project management skills to Eagle Scout candidates for Boy Scouts of America. The training course was delivered by PMINJ members Peter Krijger and Mike Vitale at the Patriot's Path Merit Badge Workshop in Parsippany. The Scouts were introduced to PM fundamentals as they relate to their Eagle Scout Service Project. The sessions were interactive and well-received by the Scouts and BSA leadership alike. 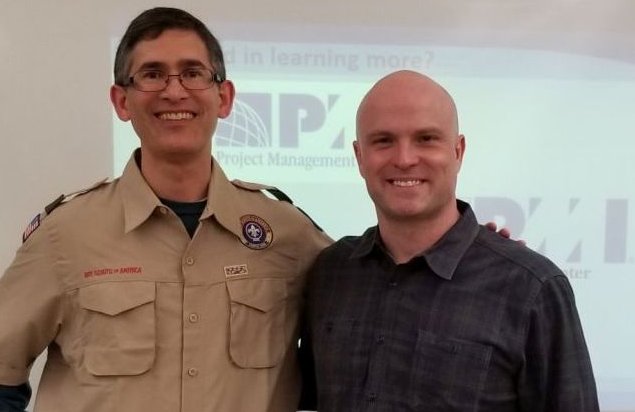 Lisa, Kevin Carroll (arthur - The Red Rubber Ball at Work: Elevate Your Game Through the Hidden Power of Play), Dennis, and John

Tom Peters (arthur - In Search of Excellence) and John

The PMINJ Chapter decided to try something new this year for the summer! (July 2005)

Instead of a summer monthly program break, we had a chapter outing to the Somerset Patriots baseball game at the PNCBank Arena in Bridgewater, New Jersey on July 31, 2005. It was a hot, but not sultry, afternoon with moments of cloudy breeze. The Atlantic City Surfs beat the home team 6-2 as the group of 65 chapter members and guests watched and enjoyed the entertainment. We cheered for recognition of our group and for one lucky group member who was randomly selected to throw the first pitch. Our hope is to continue the relationship with this local organization and learn more about their project management challenges and accomplishments. Next year, we'll try for an evening game with fireworks! Enjoy your summer and get ready for a great 2005-6 season of professional development and networking programs.

PMINJ Chapter member Jackie Cattanach and guest Michael Ilardi, who was randomly selected to throw the first pitch at the game.